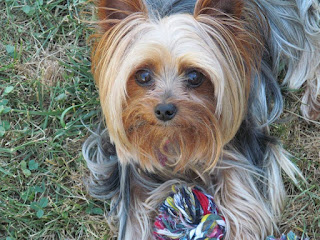 The human response to cuteness includes protective behavior, a willingness to care for the cute animal and increased attention. These things can be good for the dog. Initially, I became interested in cuteness and how humans perceive cuteness after talking with Donald Varakin from   Eastern Kentucky University who studies perception. Some of his research focuses on behavior- including head tilt- that can make dogs be perceived as cuter by humans.   Why is it we think some animals are so cute including puppies and other non-human animals? Cuteness is influenced by both physical attributes and behavior.

Like many infant animals, babies and puppies have several things in common: large heads, round faces and big eyes. These appealing traits have a name: Kindchenschema (baby schema). A term introduced by Konrad Lorenz in 1942, baby schema is defined as “a set of infantile physical characteristics ... [that] motivates caretaking behavior in other individuals, with the evolutionary function of enhancing offspring survival.”

Cuteness matters and it may impact how canines are treated. Of course, it shouldn’t matter whether canines are cute regarding their treatment. Animals of all sorts and of all cuteness levels should be treated well.

Babyface the Allure of Cute Dogs

My dog Millie, a five-pound Yorkshire Terrier, and I do almost everything together. We hike, camp, watch sporting events, grocery shop, spend all day at the bookstore and visit research labs. Everywhere we go, people are attracted to her; they want to hold her, pet her or just say hi. Why do so many people think she is so cute? Is she perceived as cute because of her looks or her behavior? As it turns out, cuteness is influenced by both physical attributes and behavior, factors that affect the perception of cuteness in a variety of animal species. full article

Humans are naturally attracted to cute animals. Baby schema is a cluster of infantile characteristics that are often considered cute: big eyes, small nose, large head, small mouth, etc. Previous research has tended to focus on how infantile features of the face and body affect cuteness perception of human and non-human animals. In our study we examined whether behavioral features can affect cuteness, specifically in puppies and adult dogs. The behavior we focused on was head tilt. The results of the study indicate that head tilt can increase cuteness of puppies and adult dogs.

“Recent evidence suggests that dogs raise their eye-brows when given attention from humans (Kaminski 2017), making their eyes appear bigger and therefore more infantile, which may increase the chances of a shelter animal being rehomed quickly (Waller 2013).”

Improving a dog’s cuteness could improve the attention and overall care it receives from humans. “Pet adoption agencies and others invested in the well-being of pets could benefit from a better understanding of how to increase cuteness without making everything look like a baby.”